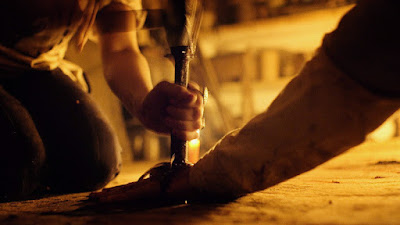 The Devil Lives Here Review-
Artsploitation Films have thrown me a curve ball with this film. When you watch the trailer, it seems like a basic and cut and dry horror film. When you start to watch this film, common sense goes right out the window within seconds. The plot from what I can remember involves Apolo. Apolo has invited his buddies, Ale, Jorge and Magu to visit a farmhouse owned by his family. He never tells them, what his motive for this visit is. It seems that he wants to free a baby’s spirit from this curse. It seems that on this day, every 9 months, that a being called Bee Baron comes to claim a baby unless descendants of the family of the child can stop him. As you can assume, the visitors are not exactly down with this and all hell breaks loose. This film was confusing but it was fun. It has this “ Candyman” like vibe towards it. I feel this film would have been smarter to add more depth to the history of the story, unless this film is like Muck, and this is the start and we get the prequel next. The acting in this film was fine, and at times very above average as well. This film felt energetic and passionate. Which adds to the confusion of the story it was trying to tell. This film really wants an audience to follow, where it should have gave them a proper introduction to the story to really follow. Though, towards the end, the film does seem to lose a little steam. That being said, this is an above average film that can get horror fans excited about the holidays. This would be a fun present. It has such a great pacing, and a understanding of what they want to get out of the story. A little more depth would have helped the film, but compared to other films out there, this film does a fair job at keeping your interest. I have to recommend this film, as I am going to be watching it again to see if it makes more sense in repeat viewings.
7.5 out of 10

Check it out on WickedChannel.com
Posted by joyhorror at 1:33 PM