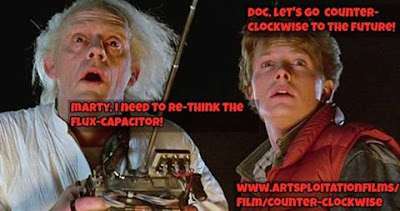 I was glad to see that in the "Making of . . ." supplement for Counter Clockwise, writer-director George Moise acknowledged, among other films, Nacho Vigalongo's Time Crimes from 2007. The two films have somewhat similar premises with a man going into the future, and pursuing himself in the attempt to prevent a future crime. The biggest difference is that Vigalongo kept everything compact, with the action taking place within a very specific space, with a small number of characters. Moise takes his main character and his clones through the outskirts of Los Angeles, with a larger number of characters encompassing a much larger space.

While films with characters caught in time loops, finding themselves repeating situations, have been around since at least the 1930s, Moise uses a visual queue from what may be the first film to show time traveling characters within the same space. That film, from 1964, was in fact titled The Time Travelers, where a group of scientists, working on a time portal, briefly spot shadows that appear spontaneously, unaware that the shadows are their future selves, moving through an accelerated time loop. Moise gradually reveals that his main character, the scientist Ethan, is caught in a time loop with brief shadows that seem to appear of their own accord, as well as visual hints that are revisited as the film progresses.