BLOOD PARADISE To Be Released on DVD/Blu-ray & VOD

Posted by joyhorror at 5:21 PM No comments: 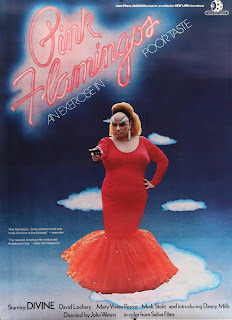 There is no better film for my first acquisition in the Imaginary Artsploitation Films Catalog than John Waters’ Pink Flamingos. This no-budget classic has all the elements of what makes a movie an artsploitation classic.

It has Controversy: An evil couple kidnaps young women, impregnates them with the sperm of a gay butler, then sells the babies to lesbian couples, and then uses the proceeds to peddle pornography and drugs to school children. There is Edie (Edith Massey), the undies-wearing, overweight, learning-disabled gal, who lives in a playpen and longs for gifts from the Egg Man. And of course, there is Divine gobbling up the warm fresh feces from a little doggie on the streets of Baltimore.

It has Violence: There is a mock trial lorded over by the vengeful transvestite Babs Johnson (Divine), which ends in the bloody executions of Raymond (David Lochary) and Connie Marble (Mink Stole), and along the way there is castration, house-burning and furniture-licking.

There is Weird Sex: Divine blows her own son Crackers (Danny Mills)  — “Do my balls Mamma!” Crackers has sex with a woman and an unwilling chicken, and the chicken pays the ultimate price.

But most of all it has Art: The film was a bracing antidote to the naïve peace-and-love world of the ‘60s. It displays a different America, one of depravity and moral turpitude, and is a strangely accurate prediction of today’s current Trumpian world. The film should be screened to all high school students — hell, grade school students.

Raymond Murray
Posted by joyhorror at 9:42 PM No comments:

RONDO comes out on DVD from Artsploitation Films on June 4th but you can Pre-Order Today on Amazon Prime for the Guaranteed Pre-Order Sale Price of Only $7.99 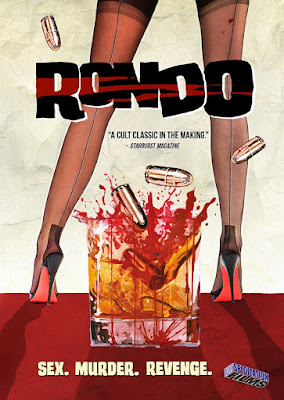 Twisted, kinky and violent, Rondo is a highly stylized pulp noir revenge/murder melodrama that relishes in the dark underbelly of civility. Troubled war vet Paul (Luke Sorge) is told by a psychiatrist that sex may be the solution to his dependency and drinking problems. She sends him to an apartment where he is to release his tensions by having sex with a beautiful young woman, all under the encouraging eyes of the woman’s husband. But deception is the name of the game as Paul and eventually his sister, are sucked into a bizarre criminal underworld where sex and murder are daily specials and revenge is served piping hot. Part black comedy, part slasher and part homage to the seedy films of 1970s grindhouse cinema, writer/director Drew Barnhardt has created a wholly unique American Indie. 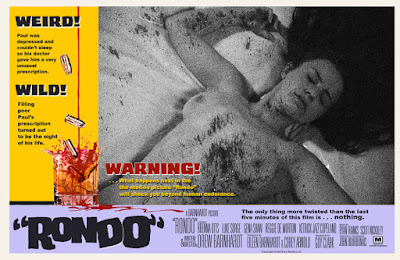 Posted by joyhorror at 12:49 PM No comments:

A Pulpy World of Sex, Murder and Revenge Served Piping Hot in RONDO

Posted by joyhorror at 10:42 AM No comments:

Posted by joyhorror at 5:50 PM No comments:

Latvian Thriller Firstborn Is Released on DVD and VOD

Latvian Thriller Firstborn Is Released on DVD and VODA Penetrating Tale of Masculinity and Revenge
FOR IMMEDIATE RELEASEMay 13, 2019
Artsploitation Films announces the DVD and Digital release of the Lavian thriller Firstborn directed by Aik Karapetian (The Man in the Orange Jacket). The film is a subtle and quietly devastating thriller about a man whose masculinity is put in question by his wife after his feeble reaction to a mugging. He then feels compelled to exact revenge on his attacker.
"A mean, menacing undercurrent slithers through Firstborn.  It's not easily dismissed...a rather shattering drama, wrapped in the clothing of a very tense, slow-boiling thriller." - Screen Anarchy

Synopsis:An intense yet coolly observed psychological thriller from Latvian director Aik Karapetian (The Man in the Orange Jacket). Francis is a meek middle-aged architect trapped in an unhappy with his younger wife Katrina. After a party, the childless couple are robbed by a thuggish young motorcyclist. Disappointed by her husband's feeble reaction to the attacker, their relationship further deteriorates. The bespectacled Francis, his long dormant masculinity now ignited, seeks and finally confronts the man, an encounter which ends in the accidental death of the thief.  The violent outcome seems to bring the two together and the wife soon becomes pregnant. But when a menacing blackmailer enters the picture, Francis now must fight for his very manhood. A mesmerizing and unnerving tale.
Posted by joyhorror at 8:58 PM No comments:

Posted by joyhorror at 7:26 PM No comments: